I recently discovered the work of Weston Langford through another model railway blog. All of his work has been released under the Creative Commons Attribution-NoDerivatives 4.0 International License.

Subtitled as “Documenting railways and related infrastructure since 1960” the website is now being maintained by Weston’s son-in-law, Andrew Godfrey. And what a treasure trove it is.

Weston had a long career as an engineer in and about the railways in Australia and interestingly on the Canadian Pacific Railway. His life in pictures (all 38,325 of them) is a gift passed down to us. And something that we should be thankful for and respectful of when using them.

The only niggle that I have – and I know this is a personal issue – is that you cannot search all images of a location – without knowing some information about the image. Wildcard searches are not allowed. Apart from that though, by looking at his CV you can get an idea of where he was and therefore narrow down the search by using the year and month to reach the results that you want.

Take a look around and enjoy the images and not only of Australia but across the working world of Weston Langford.

Weathering is cool. Having said that, it is an art that takes time and experience to master. Today’s modeller has a very skilful eye and has nailed so many subjects that I just had to share.

Focused primarily on NSW railways in the years between 1986 and 1989 Dean’s work is very skilful. I showed a teaser image at the end of my post from September 09 this year of one of his 46 class electric locos. Got some nice feedback from that and having had the time to look over Dean’s other posts wanted to share his work.

There are not a lot of ‘instructions’ regarding his weathering technique which is a shame. However, Dean’s results speak for themselves. About the best blog post for understanding Dean’s full weathering process is from 24 October 2013 and titled ‘On Track models NHEF Hopper – weathering tips‘.

Apart from being a very good modeller and weathering artist, Dean is also a manufacturer and contract weatherer. Have a look at his Facebook page for more information and for lots of model photos of his work.

Since we’re on somewhat of a roll with the Inglenook this week and it’s uses in small layout design let’s go to the source of all things Inglenook.

If you’ve not heard of Adrian’s site before then you are in a for a treat. This site has everything that you ever wanted to know about shunting puzzles, including the Timesaver and the Inglenook.

Of interest for those of us thinking of building a layout using the Inglenook design is the discussion on the design of operation and movement for the layout. Additionally there is the mechanics of designing and building the layout also. Very well worth the look.

Putting the Inglenook to work Adrian’s great little layout deserves a look. Well designed, well executed and well presented Adrian walks you through the design and build process and provides a lot of insight into the process.

Head on over to the websites and do a bit of reading – you’ll not be disappointed. 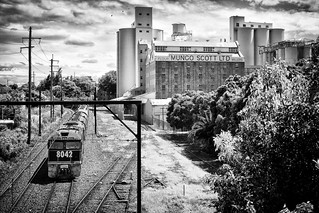 The reason the Inglenook is such a popular subject for small layouts is simple: it works on many levels to enable operations. Today let’s look at one recently found Australian design.

Captured and photographed by David Bromage at the Gold Coast Model Train Show in or around June 2016 at the Carrara Indoor Sports Stadium this layout shows what can be achieved in a small space with great presentation and attention to detail.

In addition you can build the layout board and case quickly, with little effort if using pre-built (Ikea style) components. Then you can go to town on the detail in the viewable scene. If you want more than you can add more into the scene, or as the operator has, show the operating scheme to the public at large.

Using the link in the heading above will take you David’s portfolio for the exhibition. I hope that you enjoy looking into this scene and learning as much as I have from it. I’d like to build an Inglenook in HO for exhibition use this southern spring and summer. I have several layout ideas for an inglenook and a Supernook – who knows what we’ll end up with!