A description of the spur and industries served

The Bergstrom Industrial lead diverges from the UP main line, at Vinson (MP 183.8). 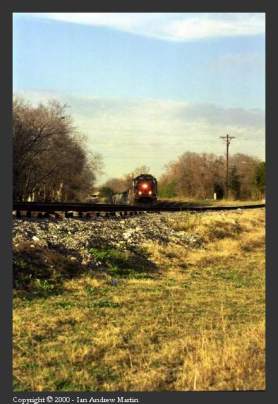 This diverging track to the east becomes the Bergstrom (Vinson) spur. The switch to the Bergstrom industrial lead is located between Falcon Cove, off Richmond Avenue, and Emerald Forest Circle (off Emerald Forest Drive). It parallels Vinson Drive for 1280 metres before crossing it at grade.

South 1st Street looking toward Radam Lane. This shows the full 50′ width of the rail corridor 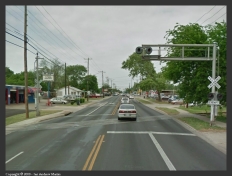 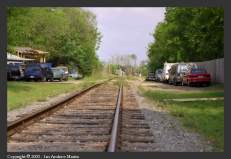 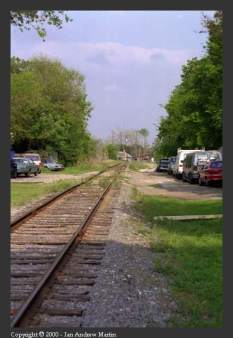 The first industrial siding off the spur was a trailing spur at Radam Lane. It was used when I photographed it for Maintenance of Way items. I’d previously seen Hopper Cars (which I sadly did not have a camera for on the day) filled with gravel, and a Pyke Brush Cutter here during my photo survey of the line. (You can see the Pyke Brush Cutter photo set here.)

The MoW spur running into the scrub and the landscape 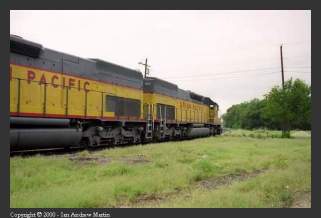 The overgrown MoW spur looking back toward South Congress Avenue 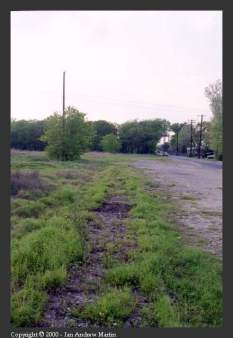 The Pyke Brush Cutter parked on the MoW spur 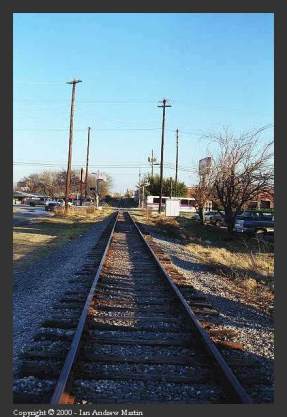 From South Congress Avenue the line continues for another 439 meters to the trailing switch leading into the Willow Springs Road area. During 2000 when I was photographing the area no customer was served by the railroad and no switches or old sidings were located along this stretch of the line. There was no direct access from either a road or parking lot into the area so I have no photos of this area.

This once busy complex of sidings served several businesses there over the years. Recent views on Bing and Google Maps show that most of the rail has been lifted or paved over as of January 2020. The customers once served on this switching lead  were many.

A trailing switch to the east of the intersection of Willow Springs Rd, and Industrial Blvd. This switch curves and drops away from the branch line to the Southwest before crossing Industrial Blvd and running in Del Star Technologies. Another switch is located within the grounds of the facility allowing four hoppers to be unloaded at the silos there. Inbound loads were plastic pellets for the manufacture of thermoplastic nets, nonwovens, laminates, and extruded components for filtration, automotive, healthcare, industrial, food, electronics, and textile markets. Del Star also made rods, core tubes, pipe products and machined parts, including end caps and other fittings, as well as parts for semiconductor machines and automotive engines at this site. 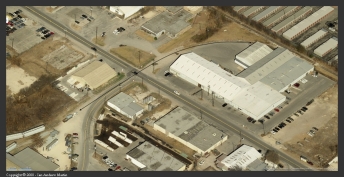 Another shot of the Sth Industrial grade crossing 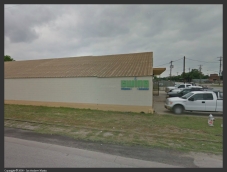 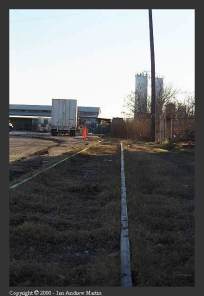 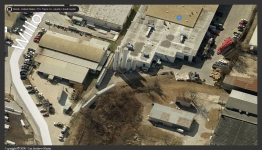 This area has had significant remodelling over time. Spurs have been lifted and today little remains of what I captured on film in 2000. There was activity at the Commercial Metal Recycling siding into their complex. I have added a Google aerial image to provide some context for those of you interested in modelling the site or a similar industry. They could handle 5 scrap gondolas there. This operation could be seen from the rear parking lot of the Taco Cabana on the Ben White frontage road over lunch.

The recycling company was not the only industry at this site as evidenced by the remains of track and switches there. The large Jeld-Wen facility (designers, manufacturers and distributors of an extensive range of interior and exterior doors, wood, vinyl, and aluminum windows, and related products for use in residential homes) has many possibilities.

They would have received dimensional lumber and shipped out at least one hopper car of wood waste  (near the cyclone on the kick back siding at the North-western edge of the property) every couple of days. While no longer rail served, backdating the layout would allow you to reconnect them and provide a regular and high value shipper and receiver for the layout.

Of greater interest to me as a modelling possibility is the former furniture factory, being used as a retail outlet when the photos were taken and the other building in front of it, both of which were rail served in the past. I believe that this would have been from the early 1950s through the late 1970s, possibly the early 1980s when the rails and the switch were partially lifted and removed. 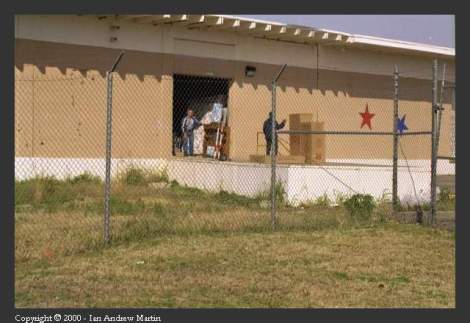 After passing the IH-35 northbound frontage road, after about 198 metres, you’d cross Governors Row at grade. There was no industrial switching in this section. Then it is on to the Woodward Street grade crossing another 466 metres away.

From the grade crossing at Woodward Street a further 230 metres on a trailing switch leads off to a siding south of the Bergstrom Spur beside a large industrial building which at that time was Four Hands Home’s factory outlet (2090 Woodward St, Austin, TX 78744).

I don’t believe that there was any rail traffic going to the building at this time. However, as a modeller you could quite reasonably find a use for 50 foot boxcars, or even high cube boxcars, delivering furniture and other items to the site.

Continuing southeast we cross South Industrial Drive at grade. Between here and Todd Lane is the only passing loop on the branch.  The main track passing length I read as about 290 metres (950 feet) while the secondary siding is about 268 metres (880 feet) between clearance points. The south (secondary) track has a trailing switch located 238 metres (780 feet) from the centre of the Todd Lane grade crossing. This leads onto a single door at the Austin Water Utility
(Glen Bell Service Centre – 3907 South Industrial Drive, Austin TX 78744).

The grade crossing at South Industrial. View is East toward the passing track.

The grade crossing at South Industrial. View is toward Woodward St.

I have no evidence of the spur or the door ever being in use. Remember that modeller’s license comes into play so go nuts and use the facility as you see fit.

Continuing southeast the next grade crossing is at Todd Lane. The passing loop ends about 50 metres short of Todd lane and is sandwiched between Austin Energy’s electricity distribution location and the City of Austin’s recycling centre off Business Centre Drive. While I watched the operations here the crew worked the train to here, and then shuffled cars  around on the Todd Lane end to get them into switching order before  proceeding on to complete any work required further down the lead.

Once across Todd Lane the line curves gently toward the South east and runs alongside Burleson Road. There were three at grade crossings into Stock Building Supply, the first two for the shipping and receiving side and the third for the office area.

A further 125 metres along the line is the trailing switch into Stock Building Supply. The company received dimensional lumber on centre beam flatcars. This siding curves quite tightly into the facility and ends at 90 degrees to the branch line. There is a Wye switch about 3 car lengths in that splits the industry lead in two and provides storage for a minimum of 8 cars through about 14 all up if the lead is also used.  One I looked at on Bing showed 9 cars on the lead and siding in loaded and unloaded states.

I am fairly certain that the industry siding was rebuilt sometime after 2000 as they only had space for four cars to be spotted and unloaded there. I never did get onto the premises during this time and am relying on memory.

This sub-branch swings away from the Bergstrom Lead on a tight curve and heads almost due west, the first industry lead about 50 metres in from the switch on the south
side of the track and runs along the edge of the local Budweiser Distributor. There is a concrete ramp and loading dock that would have been used at some time for unloading product and then loading any empties for return to the nearest brewery. I never did see this in use in my time working in South Austin.

A further 10 metres along on the north side of the track another switch serves a tilt-up concrete building with 6 external doors. Currently there is no one in the building but the front of the building has truck docks so this could have been a distribution centre of some form or another. There used to be an odd boxcar spotted there during the late 1998 and early 2000.

30 metres on are two switches one after the other. The first to the south is a track into the rear of the Alcoholic Beverage Commission building. I did not see any cars delivered there during my time photographing. It is a standard concrete tilt-panel construction with 4 doors along the back wall. It could be used for almost any warehousing if you the modeller were so inclined.

The second switch coming off the branch to the north goes to the back of Tri-Supply. They are suppliers to the building trade and supply everything; doors, windows, millwork, appliances, electrical, fireplaces, bathroom fixtures and home decor. I have never seen cars spotted here during my time in Austin but the building is a modern tilt-up panel building with 5 door spots. So anything is possible.

The branch curves away to the southwest for around 90 metres to the final switch on the branch. The industry is currently vacant but that looks to have been a storage (possibly a moving company) facility. There is a single door in the end of the building.

The branch continues across Winnebago Lane before ending at Clampitt Paper. Although the branch does not run to that facility and dead ends in the grass behind them.

Back on the Bergstrom spur and heading Southwest we cross Promontory Point Drive at grade. 200 metres further on we come to the last trailing switch on the line; this one also curving tightly 90 degrees to the southwest for the US Foodservice warehouse. There are 6 doors here. 5 served the drygoods warehouse with the other serving the freezer area for both the freezer and cool room locations.

Continuing on Southwest we come to a small team track at the end of the branch opposite what was the El Meson Taqueria.

The line then carries on for around 200 hundred metres before going dead in the weeds. The line used to continue on to the Air Force Base (Bergstrom AFB) but after the base was closed, the line was cut back to Burleson Road. The right of way corridor is intact all the way through to Highway 183 but under the care of Austin Energy and power poles have been installed along it. Interestingly you can see .

Along the way it would have crossed Montopolis Drive at grade, and then passed Mrs Baird’s Bakery off Old Burleson Road before travelling  on to cross Metlink Rd and Hwy 183 to the Air Force base.

From having seen the architect’s model, while working at Austin Bergstrom International Airport, the line for the light rail would have crossed under the highway and travelled sub-surface into the terminal buildings. Sadly this was dropped from the original scheme and is a great loss to Austin’s public transit system.

This is the end. It has been a long journey to get here.

However, we’ve covered the entire Bergstrom Spur, every siding and known Industry. I hope that you have enjoyed the ride.

Copyright 1998, 1999, 2000: All images, unless otherwise noted, are the Copyright of Andrew Martin and are not be used without prior written authorisation. Copying for personal use may be permitted so long as full attribution including the source file location, photographer’s name, the copyright information are included in your usage of the image. You should contact me for further details if needed using the contact form at the bottom of ABOUT page.