It’s not often that you get to see internal (in-plant) company railway operations today. Thankfully “Saginaw Terminal Docks” (Facebook and YouTube) posted a video from Reid Machinery in Lansing, Mi showing how they use old freight cars to store valuable machinery on their site prior to sale.

Reid Machinery Inc of Lansing Michigan have specialised in moving machinery, primarily in the forging industry, throughout North America since 1992. And while that may not seem like the most worthy thing to write about on the third Tuesday in July – I urge you to hang around a moment longer. You see they also hold their large (as in big – not lots of) inventory on and in their own railroad assets.

Yes – they have their own switching layout.

Thanks to Saginaw Terminal Docks we have a front row seat, and a cab ride on one of these switching moves. I asked him about connections to the rest of the world. He tells me that the in-plant line connects to the JAIL/Adrian & Blissfield on over a mile of old track through Lansing’s south side.

And this is so modellable…

Some of the things to watch out for in the video are:

So sit back, turn up the volume and enjoy the show.

I’m always looking for better techniques to model rust weathering. This video comes courtesy of a post I found on the MRH website by YouTuber MarklinofSweden. He shows how to create a realistic corrosion effect very simply. Take a look at the video I’m sure you’ll be impressed.

This video came to my notice thanks to a post on the Australian Model Railway Magazine’s (AMRM) Facebook account. And while not Australian in any way shape or form, Geoff Taylor’s Barmouth Junction layout is a visually stunning model.

Well worth the time to travel over the line and listen to it’s creator tell you about the layout. It’s a masterpiece and while not a small layout it is so well modelled and I imagine it is just as good to operate on that I wanted  to share it with you.

Well done Geoff and the thanks also to British Railway Modelling (BRM) magazine for showing us the layout.

I enjoy going down the rabbit hole that is YouTube, on occasion, just to see what there is to find.

Recently I came across Marty’s Matchbox Makeovers where Marty (obviously) reworks classic Matchbox vehicles, bringing them back to their showroom best. In a couple of recent videos he’s increased my knowledge on two topics that have been on my ‘get to know about‘ list:

If you’ve ever wanted to know how to use these interesting techniques I can recommend Marty’s videos. He achieves great outcomes with commonly available products (if you’re not in ‘Straya’ then you’ll have something similar available. Enjoy watching and talk to you all soon.

It’s officially Australia Day so I thought I’d share more work done weathering the Southern Boxcar underframe and sides. It’s interesting to see how the added brake gear (see more about that here) has become just another part of the model, and no longer seems to dominate the underframe, just as I had hoped it would. 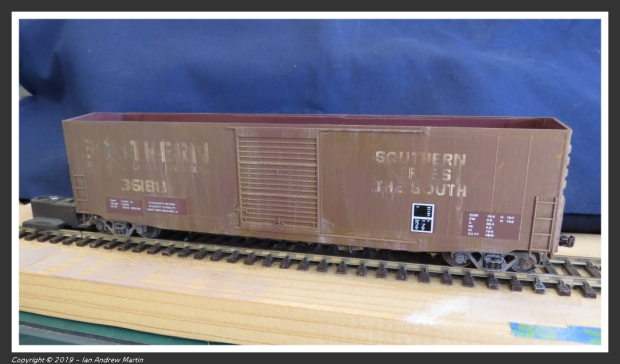 I’m relatively happy with the work so far. There is work to be done on the patches to tone them down “just” a touch. 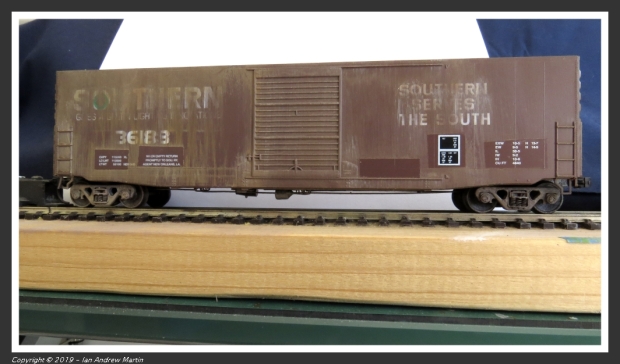 Beyond that though the underframe weathering is what I now consider to be just right (considering that it will be hard to see). I had to add a bright white background behind the model for it to show up.  Very pleased with how this work has come out. It looks perfectly functional, and most importantly, looks the business.

I’ve weighted the model appropriate to my needs (that’s roughly the cube root of the on rail weight). This is heavy by the ‘normal’ standards, but with the Kadee sprung and equalised trucks under them my cars run like dream.

Danny Harmon spends a day out following a railfan friendly switch crew of the Florida Central as they switch customers around Orlando, Florida.

This is where I believe that real railroading happens. It is where the customer meets the railroad. It’s also where modellers with small spaces, budgets and time allocation get the most bang for the buck when designing and building a layout. There’s a lot of great locations and close up detail shots of the crew working and the locations for inspiration.

Sit back, put on your headphones and enjoy the sights and sounds of a couple of vintage locomotives as the train crew prepare their train, run out to, and then switch, the customers spurs. (Clickable video below)

Make sure to like and subscribe to Danny’s channel. Recently he’s been doing a lot of switching videos. I hope he does a lot more to come. Supporting him might just get him to do more too.

Imagine an industrial 7mm narrow and standard gauge model railway with radio controlled crane and lorries. Then look at a great video and see it in action.

Of particular note are the working features of the layout including:

The gantry crane had apparently been on another layout and manually controlled. When moved to the yard it was converted to radio control. The lorries, which I believe are the work of Mr Giles Favell, (see the resources section below for more) were in use on other layouts. The rolling stock came from other layouts also.

Control of trains is by DCC, while point control uses MERG canbus.

See more about the wonders of Giles Favell’s radio control 7mm scale lorries and his layouts at:

I admire modellers who can get to the meat of a project, quickly and with vigour. Gazmanjack (Gary) on RMWeb used second-hand track, wood and other parts from his modelling left-overs to create a stunningly good small layout for operations. Read on for more.

Gazmanjack (his handle on RMWeb) back in 2014 built an outstanding layout from left over bits and pieces, as an adjunct to his current layout, to give himself something to operate on during the other layout’s longer build. I’ve only just found it and wanted to share the forum post with you.

And what a cracker this layout is. I won’t go into too much detail here, as I think the adage of a picture telling a thousand words is true on this occasion. There is plenty of information in the post too on the build including scenery, tree armatures, and so on. 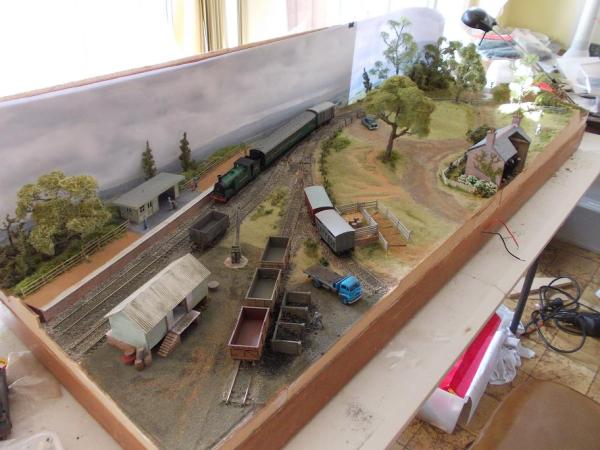 I hope that you find inspiration in the post. So much with so little that turned out so well. Well done Gary!

Locomotive dead lines make fascinating modelling subjects. One layout idea that has percolated along for the last couple of years relates to a locomotive rebuilder. A recent post by one of my favourite modellers, Mike Confalone, over on the Model Railroad Hobbyist forums, provides a great starting point.

One layout idea that’s been percolating along for the last couple of years relates to a locomotive rebuilder. One aspect of that design is the deadline, that is, the line of locomotives waiting for work to begin on their rebirth, parts removal for donation to other units, and for some the final indignity – the cutters torch and a change of state to scrap metal. Fortuitously, a small project by Mike Confalone over on the Model Railroad Hobbyist forums has been focused on a deadline too.  Mike writes in the post that:

“On the proto-freelanced Allagash, we have a caboose track at Madrid. With the move to 1984 a few years back, the caboose track is used less and less as cabooses begin to become less common. We still run them on most of the road jobs, but most of the locals go without, per the prototype in that era. So, I’ve converted the caboose track to a diesel deadline. Its a bit tight but it’s the only available real estate in the yard and I didn’t want to put them on a remote siding. I wanted the deadline near the engine house. Seemed to make sense.”

There’s five pages of comments and information there as of my writing this post. Being a fan of Mike’s work I may be biased. However, I find his work to be of the highest quality and well worth the time to review. I hope that you feel the same way after you’ve read through the thread.

There was an interesting video posted by Danny Harmon (who goes by the handle of Distant Signal on YouTube).

He focuses on the increasingly rare small switching customer. Once upon a time it was the core of railroading. And while it is harder to find, in some places it can still be found as Danny presents in this video.

Enjoy the video! And if you like Danny’s videos as much as I love his voice then like the video and subscribe to his channel. I have no affiliation with Danny other than as a happy viewer of his content.