In the past I’ve seen a lot of weathering done that I said was too heavy, unrealistic. Something that you’d never see in the wild. Today I reviewed one of Adrian Nicholls photos on his photostream on flickr. 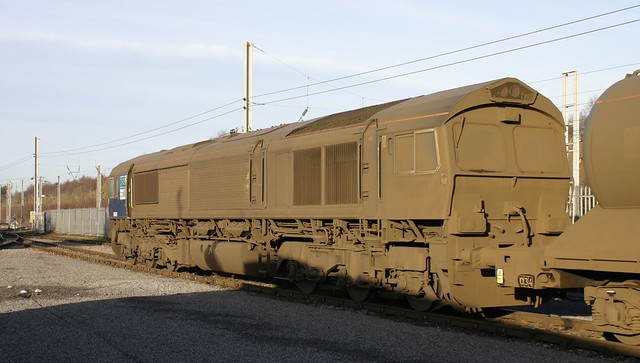 I take it all back. Adrian says on the site: “66 301 catches the late afternoon sunshine at Carlisle Kingmoor TMD after its 21 hour diagram on train 3J11 the North West RHTT circuit, (17.15 to 14.05). The loco has just been fuelled and is waiting while the water jetter generator and rear loco (66 427) are dealt with. It will then do the whole circuit again hence the accumulation of filth on the locomotive as there is little depot down time on this circuit for cleaning. Never a very pleasant time of the year to deal with locos in such a condition as what every you touch is covered in filth off the track and a drivers railway uniform can soon resemble a fitters overalls if you are not careful.”

I guess you really have to model from the prototype. I would never have thought of making a locomotive this filthy. But there you have it.